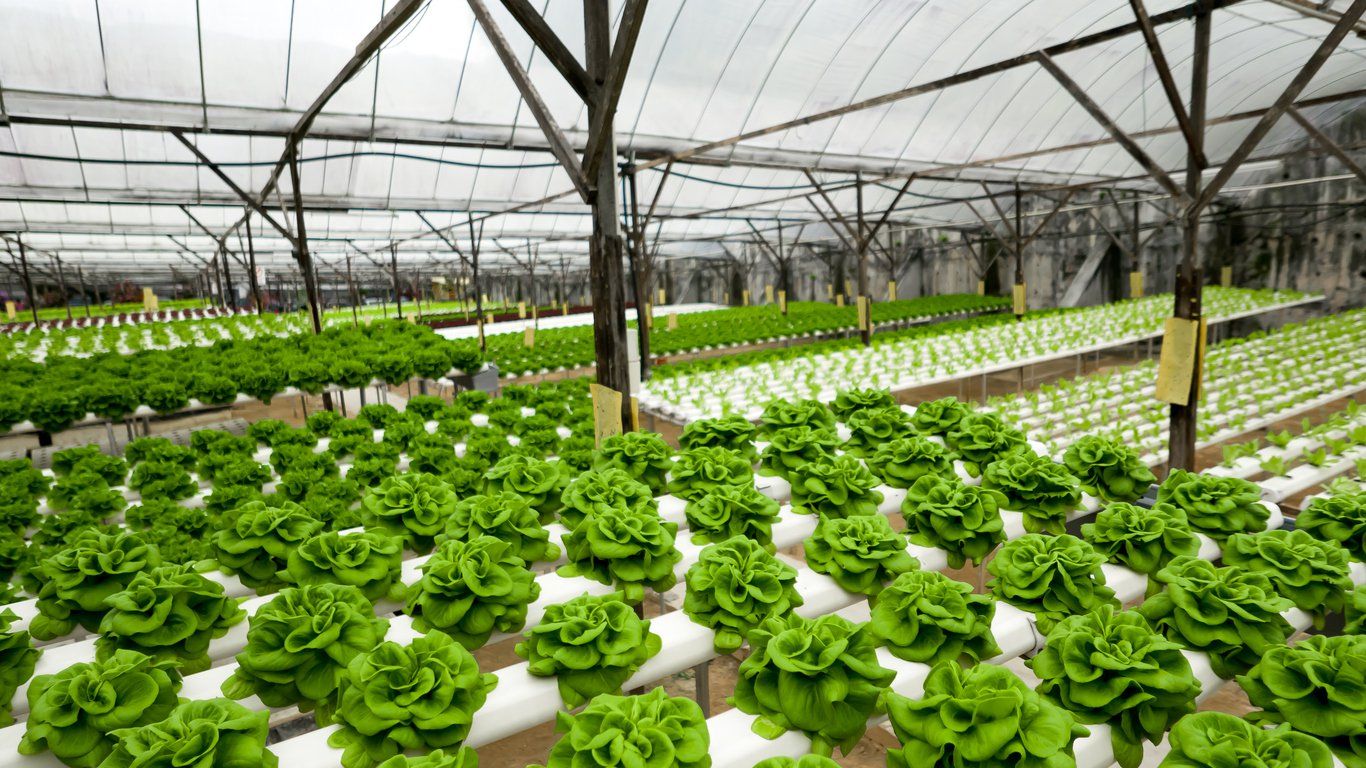 Unlike a traditional farm, the sprouting plants here grow without soil. They flourish atop vast racks with water trenches running through them that are slightly angled so that gravity helps the irrigation water shuttle around the closed system, instead of using energy-sucking pumps to move water around. Nutrients that the plants need are dissolved into the water, which comes from the local municipality’s supply. Any water runoff is purified, nutrient re-enriched, and released back into the channels.

The crops here grow year round and under relatively little stress, because conditions in the greenhouse, including the amount of sunlight and the temperature, are monitored closely by sensors. Water evaporation is also minimal.

This futuristic food production space is one of five greenhouses in New York and Chicago operated by Gotham Greens. Founded in Brooklyn, Gotham Greens grows fruits and vegetables in urban greenhouses that are outfitted with hydroponics technology and other cutting-edge features, such as a closed irrigation system that minimizes water requirements.

“[This system] allows us to use about 95% less water than conventional field farming,” says Gotham Greens co-founder and CEO Viraj Puri. “We use less than a gallon of water for every head of lettuce we produce.”

On a traditional farm, it takes more than 15 times that amount of water to grow a head of lettuce. With Americans consuming about 930 million pounds of lettuce each year, according to the Produce Market Guide, if such hydroponics systems were adopted just across the lettuce industry, they could save billions of gallons of water each year in the United States alone.

Agricultural innovations like these, along with industry expansion, could also help ease the concerns that, due to population growth, the human race will become unable to adequately feed itself. By the year 2050, the planet’s population is expected to reach nearly 10 billion people, boosting food demands by approximately 60%. A 2018 study found that, if effectively deployed in cities around the world, urban agriculture could produce as much as 180 million metric tons of food a year, including up to 10% of the planet’s legumes, roots and tubers, and vegetable crops. The study showed such widespread urban agriculture integration would have a range of benefits, including reduced energy use and drastic cuts to water consumption.

In order for the world’s food producers to keep up with a growing population’s food demands, they’ll have to increase agricultural development one way or another. If the status quo is maintained, the required boost in agriculture production could generate a 15% uptick in freshwater use. But the earth’s supply of freshwater — about 70% of which is already utilized by global agriculture — is under threat, due in part to global warming. Higher temperatures create a host of problems for the world’s water system, including faster evaporation, the disappearance of inland glaciers that feed freshwater supplies, and more extreme weather events that contribute to greater freshwater runoff.

Advancements in hydroponic technology, however, have led to the development of recirculating hydroponic systems, which minimize water use by recycling unused irrigation water. Gotham Greens has such a system in its greenhouses.

“As water just continues to become a more scarce resource around the world,” Puri says, “we believe this form of agriculture is going to play a greater role in modern agricultural systems.”

Gotham Greens did not invent its closed irrigation system, but its approach is particularly efficient, Puri says. To help educate the public about innovative farming techniques, Puri’s company offers tours of its greenhouses, and has invested in urban agriculture education initiatives. Puri has also participated in panel discussions to educate the public about the positive impact that urban farming can have on the world, despite the increased competition his disclosures could bring to his business.

He says he’d welcome “a more system-wide, cohesive effort to support this form of farming.” Puri has been encouraged by the U.S. government’s examination of new, sustainable farming practices as well, which could lead to greater implementation of them.

Urban agriculture also allows for consumers in cities to get fresher produce because it doesn’t have to travel thousands of miles. Currently, almost all lettuce eaten in the U.S. is grown in two water-starved states: California and Arizona. Urban agricultural companies provide lettuce to communities without the environmental impact that comes with shipping lettuce thousands of miles via fossil fuel-burning, refrigerated trucks. Plus, more farming with hydroponics translates to less land that will be needed for agriculture, which could, in turn, mean the reestablishment of previously lost natural habitats.

Urban agriculture does have its drawbacks. Growing food in cities, which are comparatively more highly polluted environments than rural areas, leads to food contamination concerns. And while urban farms increase property values, they raise economic concerns about the displacement of people who lived in such areas before the high-tech food producers came along. Critics also say that the products from such farms are more expensive, raising questions of access to those with limited financial resources.

And while energy use varies widely from site to site, the artificial lights and other climate control measures often used by urban farms may at times consume far more energy than traditional farms. Another limitation of urban agriculture is embedded into its very essence: the fact that the farms are built in cities, which have a dearth of available space to begin with. One study found that if every vacant lot in New York City were suddenly dedicated to farming, those farms would yield enough produce for just 160,000 people — and there are over 8 million people living in New York City.

“Urban agriculture is really exciting for a lot of reasons, but when you look at a city like New York, we’re never going to be able to grow all of our food needs within the city limits,” says Ricky Stephens, director of digital strategy at Agritecture, a consulting firm focused on urban agriculture project development.

Still, Stephens says urban agriculture should be part of a more localized food system, as its benefits go beyond environmental conservation to an awareness about the value of food and community.

“I think the beauty of urban agriculture is that it really brings that understanding of a local food economy directly to the consumer,” he says. “You’re actually seeing it and you’re maybe interacting with the farmers, maybe you know the farmers.”

The ability of Gotham Greens to use up to 95% less water than traditional farms do in producing some of its food ranks the company on the highest end of the spectrum of water conservation across the urban agriculture industry, Stephens says. Gotham Greens, he says, is “one of the most successful urban farming models that exist[s].”

One hope of developers like Stephens is that urban agriculture will catch on in cities around the world, and Gotham Greens is an impressive example of how to do it.

That expansion is already underway.

By the end of 2019, after opening new farms in five states, Gotham Greens itself will manage over 500,000 square feet of greenhouses. And food production businesses that have adopted hydroponics and other new technologies like that of Gotham Greens have been popping up around the world. Some new companies are even growing farms in shipping containers, demonstrating that fresh food production can truly happen just about anywhere these days.